The original buildings consisted of a four storey merchant square built in yellow sandstone and completed in 1841.  The owner, James Campbell, then Lord Provost of Glasgow, had been honoured by Queen Victoria with a Knighthood.  In celebration of the birth of the Prince of Wales, later to become Edward VII, he named his new building Princes Square.  The buildings have a pleasant, civic character and are Grade B Listed.

The Square was designed to preserve and restore the original buildings and yet to transform the space into a modern shopping centre and provide an attractive meeting place, “a new Rialto”.  Victorian Glasgow had particularly strong links to the Art-Nouveau Movement and the Vienna Secession.  This spirit of confidence and innovation, epitomised by the Tree of Life, stemming from ancient Celtic and Norse culture, set the tone for the rebirth of Princes Square.

The Square – the place to see and be seen!

The Square is a theatrical space where people come to see and be seen.  It opens out from its three front entrances on Buchanan Street into an explosion of space.  The original walls form the sides of the Square with the Eastern wall remodelled to form a Palladian screen.  The space is covered by a clear glass domed roof.  The original cellars of the Prince of Wales building were excavated to provide additional shopping areas and this adds to the impression of height.

It is a space which is neither impersonally over-large or too small and cramped.  The proportions of the galleries and structure create the feeling of a conservatory to a characterful old house – symbolised by the Palladian screen.

Visitors are ‘invited’ to explore all corners of the building.  The lifts, staircases and elevators are designed to allow people to feel part of the theatrical display of pattern and colour.  The ‘grand’ staircase, lifts and escalators are all clearly visible from the entrances.

The grand staircase is a double helix, designed to allow people to progress gradually between the Courtyard, ground and first floors.  The curved landings between each flight also allow people to stand and look around.  The staircase itself is formed in folded metal supported on tubular steel columns.  These columns are topped with decorative standard lights’ swirls of colour reminiscent of Tiffany lamps.  On either side of this staircase are two glass feature lifts.  The ‘towers’ frame the original East wall of the Square.

The galleries around the Square are carefully designed to afford generous movement and allow as many shops as possible, on all levels, to be seen from any one vantage point.  The lines of the gallery were curved in plan and edges moulded to soften the appearance.  The balustrades and galleries and the staircase are designed so that the ornament becomes richer at each progressive level.  This is to encourage people to gaze upwards.

Our Shops and Restaurants

Princes Square is home to a number of restaurants, bars and coffee shops – see our food guide for full details of what’s on offer – and has over 30 retail stores ranging from jewellery to homeware including Kate Spade, Dermalogica, Carvela & Timothy Oulton. Don’t miss the chance to catch the latest movie at Everyman cinema in the courtyard area. 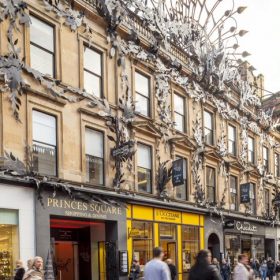 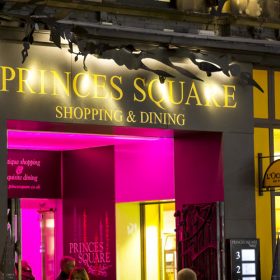 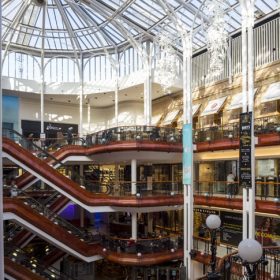 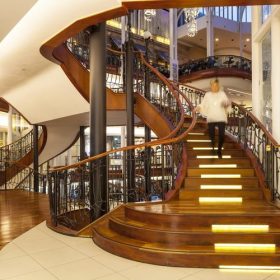 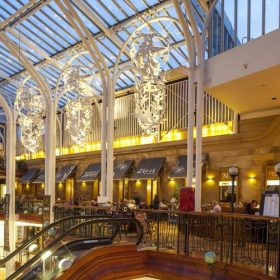 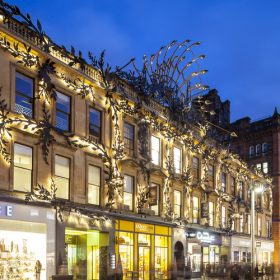 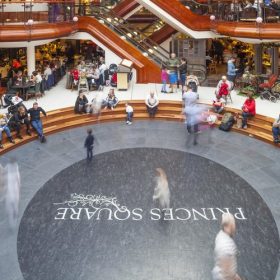 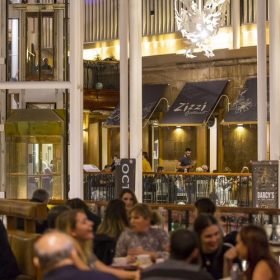